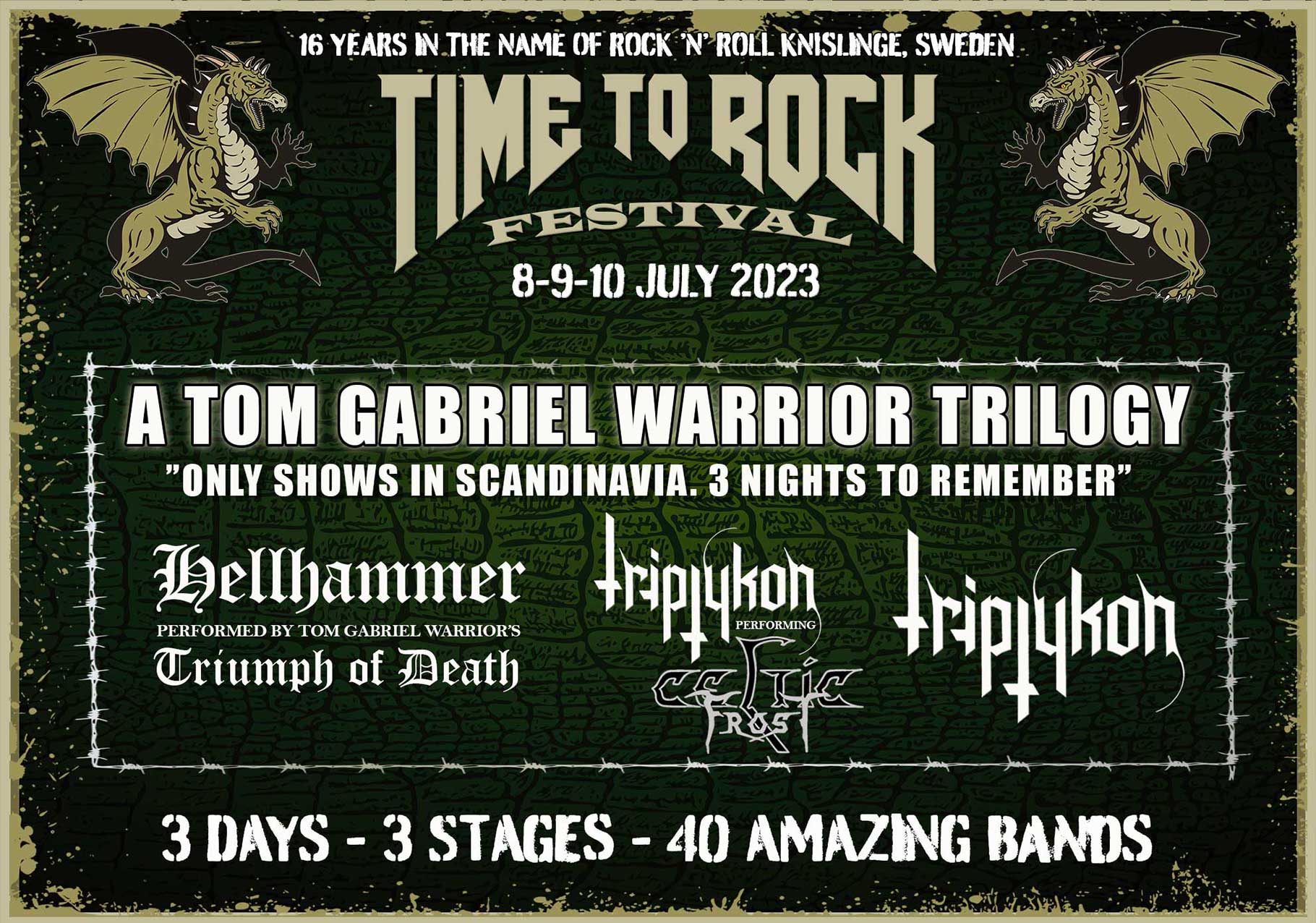 It is with pride and a feeling of total euphoria that we, at Time To Rock Festival, can present a totally unique trilogy that will take place over all three festival days, July 8-9-10.
This exclusive performance will be unveiled at only a handful of locations on the planet and the show at Time To Rock will be the only one in Scandinavia, so you can rest assured that you will experience something very unique. This is your chance to witness history in the making.
This three day series of headline performances will celebrate the life and work of the legendary Tom Gabriel Warrior, one of the true pioneers of extreme metal. Throughout his illustrious career, he's been the frontman, leader and main songwriter of the genre defining bands Hellhammer, Celtic Frost and now Triptykon.
This trilogy of performances is a one of a kind event and will give the fans the chance to hear the songs of Hellhammer and Celtic Frost performed live as well as Triptykon, who will close this triple celebration of Tom's career.

This three day event will consist of the following performances:

HELLHAMMER performed by TRIUMPH OF DEATH
Hellhammer existed for a mere two years, from May 1982 to May 1984. In light of their now mythically iconic status in the global metal scene, it is almost inconceivable that most of this music had never been performed live for almost four decades and thus the idea of Triumph Of Death was born.
The first steps towards the realization of Triumph Of Death, named after Hellhammer's most infamous song and intended to be a very respectful and authentic tribute to Hellhammer, were finally taken in 2014, and the band was officially founded in autumn of 2019. Triumph Of Death consists of individuals who not only love this music but truly understand it. The line-up emulates
Hellhammer's final incarnation of April/May 1984, when the group had added an additional guitarist. Since its inception, Triumph Of Death has played many highly acclaimed concerts across the globe.

TRIPTYKON performing CELTIC FROST
Since their inception, Triptykon have often paid respect to their seminal, extreme metal predecessors, Celtic Frost by including their songs in their live set. This summer, for the first time ever, they will perform a full tribute set of early Celtic Frost songs in a very limited number of locations and will be headlining the Saturday night of Time To Rock, their only Scandinavian
appearance. Fans can expect to hear songs from the band's classic era, taken from the albums 'Morbid Tales' (1984), 'To Mega Therion' (1985), 'Into The Pandemonium' (1987) and beyond.

Tom Gabriel Warrior: "Performing such a unique trilogy of concerts comprising music from throughout my life as a musician is something I have never done before. It is an intriguing idea, and I am certain that it will also be a very emotional undertaking for me. I am deeply grateful to Time To Rock Festival for having reached out to me with this proposal and for the interest and support for my creative work. This is not something I would ever take for granted. We
all will make this a very special event."

TRIPTYKON
Formed in May 2008 to further develop the darkness invoked by its immediate precursors, seminal black/extreme metal pioneers Hellhammer and Celtic Frost, Triptykon evolved from a concept for a Celtic Frost side project initiated by Tom Gabriel Fischer (a.k.a. Tom Gabriel Warrior), the group's singer, guitarist, and main songwriter. To date they have toured the globe extensively and have released the highly acclaimed albums 'Eparistera Daimones' (2010),
'Melana Chasmata' (2014) and 'Requiem' (2020). With a huge, dedicated fanbase residing in all corners of the globe, Triptykon defines harrowing darkness and heaviness and this performance from arguably the heaviest band in the world will be one that you will never forget.

What is Time To Rock Festival and where is it located?
Time To Rock Festival has been around for 16 years and is located in the southern parts of Sweden in the small city of Knislinge, located 2 hours by car from Copenhagen/Malmö area and 20 km from the bigger cities Kristianstad and Hässleholm. The festival will take place July 8-10th 2023 with a pre-party on July 7th.

A total of 40 bands will be announced and so far the rest of the line-up presented is:
SAXON, M.S.G, D-A-D, THE TOY DOLLS, MOLLY HATCHET, BOURBON BOYS, MASTERPLAN ULI JON ROTH, ANGEL WITCH, TYGERS OF PAN TANG, TUNGSTEN and KNOGJÄRN. Another 25 atcts will be confirmed.

For tickets and information: www.timetorock.se

The Hooters confirmed! The Hooters was formed in 1980 by Erix Bazilian and Rob Hyman. In Sweden the band got their biggest hit with the song "500 Miles" from the album "Zig Zag" (1989) but in their native home of the US of A they already had several hits like "All You Zombies", "And We Dance", "Day By Day", "Johnny B" and "Satelite". Whn we talk hits, we can also mention that Rob wrote the 80's classic song "Time After Time" together with Cyndi Lauper and Eric was the mastermind behind the 90's classic "One of Us" by Joan Osborne. So expect a hit...
Ross the Boss confirmed! Ross Friedman, later Ross the Boss, co-founded the now iconic punk band The Dictators in 1973 with whom he recorded three full-lengths albums, After that there was a stint in the French hard rock band Shakin' Street and then, together with Joey DiMaio, he formed America's most heavy metal bands. Manowar. When Shakin' Street was opening up for the then Dio-fronted Black Sabbath in 1980, Ronnie James Dio introduced Ross to bassist Joey DeMaio. They found each other quickly, teamed up with singer Eric Adams, who would then form three of four cornerstones of Manowar over six records from "Battle Hymns"...
Legendary punk band confirmed Sham 69 was formed in Hersham, England back in 1975 and is today one of the big and most legendary punk bands within british working class punk. In their early career they had an audience that created a lot of violence and hooliganism during the bands shows. Today Sham 69 is one of the bands mentioned when you talk about the punk sub genre Oi! From the beginning the band was very much punk only but started slowly to move more towards classic British rock influenced by bands like The Who, Rolling Stones and Mott the Hopple. The sound of Sham...
New area map We have now put up a brand new map for our new festival area layout. Some changes have been mades at we have made a bigger camping site and also moved the tent camping to be a part of the Caravan/RV camp. This to get more space for our brand new tent stage!. Click here to see the map!
LATEST NEWS FIRST 6 BANDS CONFIRMED Finally the day is here when we can announce the first bands and release the tickets to Time To Rock Festival 8-10 July 2023 with a pre-party on July 7. We start out with legendary guitar wizzard MICHAEL SCHENKER and his MSG. From Jacksonville, Florida comes the mighty southern rock band MOLLY HATCHET and from the UK the funniest among the classic British punk bands THE TOY DOLLS . Then we ad another guitar hero in the shape of Scorpions legend ULI JON ROTH and finish off with two classic bands from the NWOBHM era in ANGEL...
NEWS FOR 2023 2023 will be the first year that we will have 3 stages at the festival and by doing this expansion, the total amount of bands will increase from 26 to 40! The new stage will be inside a big tent, with room for more than 1000 people inside and by having one side of the tent open, even more people will be able to watch the bands playing this new and cozy stage! We will of course also have a bigger festival area with the same cozy feeling as before with a lot of space for everyone. And a bigger area...
Time To Rock For 15 years we called our festival Helge Å Festival (after the river running straight pass the area), but as we wanted to strengthen our position both in Sweden, but also internationally, we dediced to use the slogan "Time To Rock" as our name instead, so in 2022 we became "TIME TO ROCK FESTIVAL". Our goal is to deliver the perfect blend between, rock, blues, classic hard rock and heavy metal. Our basic idea is that we want to deliver a festival the way WE want to experience it. We want a cozy and laid back athmosphere and a close relation...
{{ message }}
OK