Teaze first show in Europe ever! 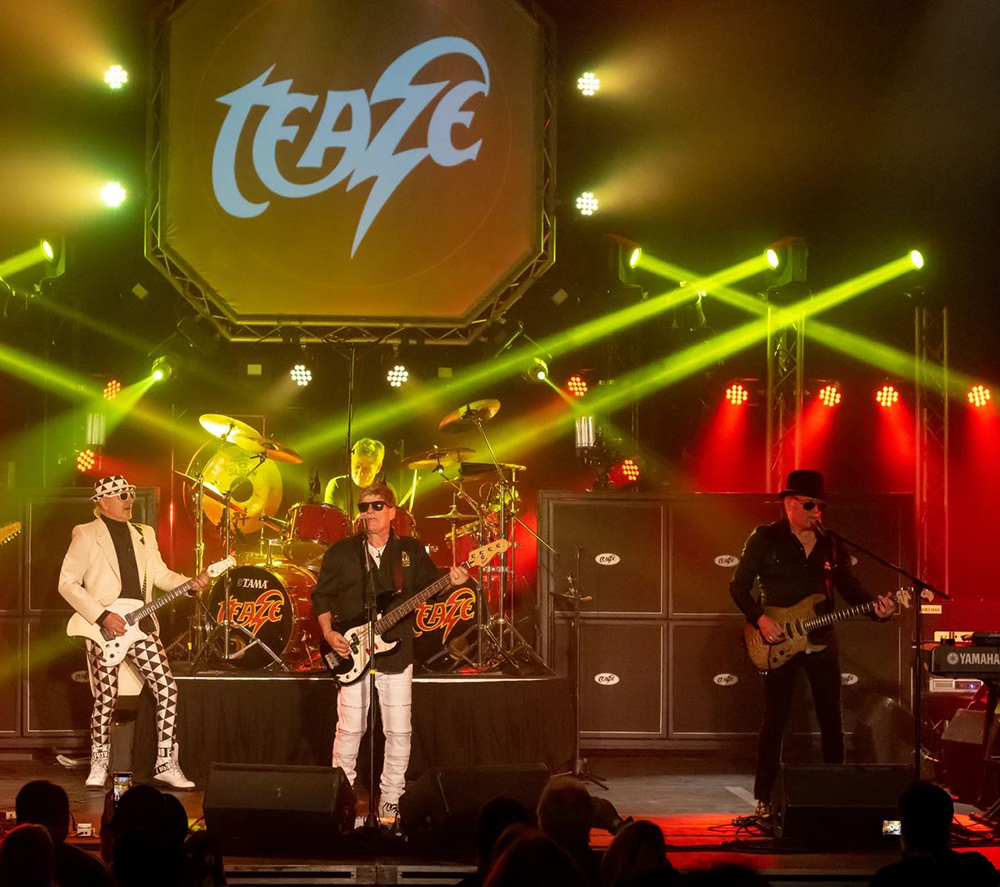 Here we have a hidden gem for you! Made in Canada!
Any trivia buff will confirm that Windsor, Ontario is directly SOUTH of Detroit; the point being that there are parts of Canada closer to the American heartland than one might suspect.
TEAZE came from Windsor. They breathed Detroit's airwaves and rocked to its beat. Local influences mattered most. Bob Seger System, MC5, The Stooges, Grand Funk and Brownsville Station. This mixed bag of power rock, r&b and pizzazz made TEAZE stand out in Canada like the smell of a Marlboro in an Ontario beer parlour. There was something almost un-Canadian about the evangelical fervor that TEAZE displayed. Brian Danter sang 'til ithurt. Mark Bradac and Chuck Price invented slam dancing (and that was while playing their guitars). Mike Kozak, who never let his drum kit get in the way of self-expression, regularly went screaming off the stage to be closer to his audience. It was three or four shows in one and nobody had a label for it. The first TEAZE album was recorded in 1976 at a facility near Toronto called The Grange. The band thought they were taping demos. Nevertheless an LP called "TEAZE" was released. It ultimately went on to sell more copies in Sweden than Canada. After that, TEAZE was signed by Aquarius Records and the band moved to Montreal. In late 1977 they made an album called "ON THE LOOSE" with producer George Lagios. The big hit turned out to be a country styled song called "SWEET MISERY." Actually, to say that "SWEET MISERY" wreaked havoc on the band's image is an understatement. People who liked the song tended to dislike everything else about the band. Meanwhile those who might have been interested in the real TEAZE often never got past the Floyd Cramer intro. The next album marked a night of firsts. It was the first show outside of Canada. It was their first outing as a concert headliner. It was their first (and only) live album, "TOUR OF JAPAN."
But after 5 records it was over and they played their last gig in 1980.
Interest in the band started to pick up again when the Internet made it's breakthrough and we move forward to 2019 when Bradac brought up the idea with Danter of a reunion and after a dinner in town with the old band, the decision was made to go "all in". A packed Windsor Walkerville Theater in the winter of 2018 was the band's first together in almost 39 years and it was a total success. Those who saw the band testify that the band sounds just as good now as when it started and they have kept their strength in not only sounding good but also giving the audience a real show. As you know, there was eventually a pandemic that paralyzed the whole world and, among other things, put an end to Teaze playing in Japan again. BUT now they are coming to us in Knislinge and doing their first gig ever in Europe and if you like classic hard rock, you will be completely sold on this Canadian band that should have been much bigger than they are. But they are back together, that's good, and we are proud to have them at Time To Rock!

Complete running order! Now we have the complete running order up (except for the s slots that will be for the bands in our band comeptition) Click here for the complete running order!
KK's PRIEST confirmed - only show in Sweden In 1969, the first edition of one of the world's biggest bands within the New Wave of British Heavy Metal - Judas Priest - was formed. One of the founders was guitarist KK Downing. KK was in the band until 2011 and over the years, he was one of the songwriters for most of the metal world's biggest songs as "Breaking the Law", "Living After Midnight" and "Painkiller". After KK left Judas Priest, he has not been very active as a musician. He has made a few guest appearances on records and some occasional live performances but not more than that....
Sungen confirmed! Every festival must have an emcee worthy of the name, and preferably one who has both knowledge of the subject of rock music, but who at the same time can raise the mood with a bit of craziness and humor. So that's why we proudly present: Sungen . This social media phenomenon is used to the big stages. If he's not gliding around in the Vip at the biggest festivals, he's in the studio recording party hits. He has party nights with Saxon, live gigs in front of thousands, pre-parties with The Hives and after-parties with Bullet on his extensive CV....
Blind Guardian confirmed! Now we can proudly present BLIND GUARDIAN, who were one of the pioneer bands in the genre we call Power Metal. The band was already formed in 1984 by Hansi Kürsch (vocals, bass) and Andre Olbrich (guitar) under the name Lucifer's Heritage, but when they signed a record deal with No Remorse Records, they changed their name to Blind Guardian to avoid speculation about Satanism. Since the debut album "Battalions of Fear" (1988), the band has released 11 more albums. From the beginning it was a lot of speed metal, but already by the third record "Tales From the Twilight World"...
Back Street Crawler. The band plays on! The story about Back Street Crawler is of course mainly a story about one of the most influential guitar players of all times, Paul Kossoff (1950-1976). First a member of the ground breaking and legendary band FREE, Kossoff moved on to form Back Street Crawler with singer Terry Slesser. The name of the band was taken from the title of a previous solo album by Kossoff. The story of the band is unfortunately rather short, because after two studio albums, Kossoff died in 1976. He was only 25 years old. Some of the band members continued to play together under the...
Pre-party Friday July 7 The day before the "real" festival begins we will throw a pre-party and we hop that you will all come and party with us. The first 3000 who bought either a 3-day ticket or a 3-day VIP ticket will have free admittance to this day. Early next year we will also release a limited number of 1-day tickets for the pre-party and the tickets will cost 395 SEK. This day we will only have one stage playing and five great bands! We open up the festival area at 4 PM and at 5.15 PM the local favorites SLÄKKTEN will enter the...
The Hooters confirmed! The Hooters was formed in 1980 by Erix Bazilian and Rob Hyman. In Sweden the band got their biggest hit with the song "500 Miles" from the album "Zig Zag" (1989) but in their native home of the US of A they already had several hits like "All You Zombies", "And We Dance", "Day By Day", "Johnny B" and "Satelite". Whn we talk hits, we can also mention that Rob wrote the 80's classic song "Time After Time" together with Cyndi Lauper and Eric was the mastermind behind the 90's classic "One of Us" by Joan Osborne. So expect a hit...
{{ message }}
OK